Two of the most explosive teams in the country, Baylor and Oregon, scored a combined 33 points this week in their losses. I guess Oregon meant it when they said they didn’t care about going to the Rose Bowl. It was also the week of the overtime game with 5 games going into extra time. Things are getting exciting as we head into rivalry week next week.
For me, this week in football was good and not-so-good. Good because UNLV beat Air Force in Air Force to become bowl eligible for the first time since 2000. UNLV was also the first team with a 1,000 yard RB and WR this season with Tim Cornett (220 rush and 4TD) and Devante Davis (75 receiving yards). That is also the first duo to do it at UNLV. It was not-so-good because Arkansas fell to Mississippi State in OT, making their chances at another win almost impossible because they go to LSU next week. Whether or not they win, I will be in Tiger Stadium to cheer on my Arkansas Razorbacks. You never know, the Hogs always play LSU tough…

How I Fared: I was 3-3 this week, bringing my overall total to 50-29. Not too shabby. I picked Baylor, UCLA and Boise State. UCLA only lost by 5 and Boise State lost at SDSU in OT. Baylor, on the other hand, was destroyed by Oklahoma State. How can a team that averaged more than 60 points a game not even make it to 20 points? The answer is turnovers, 3 fumbles lost and 3 missed 4th down conversions make it hard to win. Oregon also forgot how to be Oregon, scoring only 16 points at Arizona and giving Stanford back the Pac 12 North. There are only two more weeks of the regular season left. What a season so far.

Notable Games
17Arizona State 38 14UCLA 33; This was a deciding game for the Pac 12 South division, and Arizona State decided they wanted it more. Well, maybe they wanted it more in the first half. The Sun Devils outscored the Bruins 35-13 in the first half, but only managed a field goal in the 2nd half. But UCLA had penalties late that kept them from winning. This win means Arizona State will play Stanford for the Pac 12 Championship. ASU QB Taylor Kelly was 20/27 for 225 yards and a TD to Jaelen Strong, and also rushed for 99 yards and a TD. DJ Foster and Michael Eubank each had a rushing TD as well. Carl Bradford picked off UCLA QB Brett Hundley and returned it 18 yards for the TD for ASU. Brett Hundley was 18/26 for 253 yards and 2TDs and an INT. Shaquelle Evans and Devin Lucion caught the TDs and Myles Jack and Paul Perkins each rushed for a score. Because of this loss, the UCLA USC game next week won’t have the same impact, but it should still be a good game. ASU will face instate rival Arizona and that game has the potential to be very good, it also has the potential to be a huge blowout.

Navy 58 San Jose State 52 3OT (Friday); The first of the five games that went into overtime was this thriller. The most amazing stats of the game come from Navy QB Keenan Reynolds, who accounted for all 8TDs the Midshipmen scored. He was 4/6 for 46 yards and a TD, but ran for 240 yards and 7TDs. And I thought Tim Cornett scoring 4TDs was pretty amazing. The one pass TD was caught by Darius Staten. SJSU QB David Fales was 42/56 for 440 yards, 5TD and an INT. Thomas Tucker had 107 receiving yards and TD and rushed for a score. Chandler Jones had 101 receiving yards and a TD. Kyle Nunn caught 2TDs and the last was caught by Tyler Winston. To take this game into OT, SJSU had to score a TD and go for 2 as time expired. Navy finished with 478 yards and SJSU finished with an even 600. What an exciting game.

Wyoming 59 Hawaii 56 OT; Another extremely high scoring overtime game. Hawaii was unable to get the win and falls to 0-11 this season. But 0-11 isn’t completely descriptive. Hawaii has been very close in a couple games this season, but has been unable to pull out the wins. Wyoming was able to overcome 3 fumbles to win this game. The QBs were the leaders in this game. Wyoming’s Brett Smith was 29/48 for 498 yards and 7TDs and rushed for 142 yards and a TD as well. Robert Herron had 141 receiving yards and 4TDs, and the other 3 were caught by Jalen Claiborne, Keenan Montgomery and Shawn Wick. Hawaii QB Sean Schroeder was 37/50 for 499 yards, 6TDs and an INT. Chris Grant had 171 receiving yards and 4TDs, Clark Evans and Marcus Langkilde each caught TDs as well. Joey Isoefa had two rush TDs for the Spartans too. It is always exciting to see these kind of numbers as a fan, but not as a defensive coach. Will Hawaii be able to get a win next week? They have a chance if they can put up numbers like this again.

Nebraska 23 Penn State 20 OT; Nebraska was able to get a big win over Penn State in OT this weekend. Once again, Nebraka’s Taylor Martinez was unable to play so Ron Kellogg III had to come to the rescue after backup Tommy Armstrong Jr went down. Kellogg was 20/34 for 191 yards and a TD to Quincy Enunwa. The other Nebraska TD came on when Kenny Bell returned a kickoff 99 yards. Ameer Abdullah also rushed for 147 yards. Penn State QB Christian Hackenberg was 16/33 for 217 yards, 2TD, an INT and a rush TD. The two TD passes went to Adam Breneman and Jesse James. The game came down to kicking, and Nebraska came out on top. With Michigan State’s win over Northwestern, Nebraska can’t get to the Big 10 Championship game, but this is a good win over a good Penn State team.

San Diego State 34 Boise State 31 OT; SDSU might not have been able to beat Fresno State in OT, but they did win this game in OT against Boise State. This worries me because UNLV has to play SDSU next week to secure a bowl spot. But we’ll cross that bridge when we get there. This game is not as big of an upset as some might think. SDSU is a good team and Boise State is below its norm. San Diego State QB Quinn Kaehler was 23/37 for 288 yards, 2TD and an INT. Adam Roberts and Colin Lockett caught TDs and the Aztecs were helped by a rush TD from Adam Muema and a 41 yard punt return TD from Tim Vizzi. JJ Whittaker also picked off Grant Hedrick and ran it back 18 yards for a score. Hedrick was 21/35 for 202 yards, 2TD and 2INT. Shane Williams-Rhodes and Matt Miller each caught TDs. Jay Ajayi had 103 rush yards and a TD. The Broncos also had a special teams score when Bryan Douglas returned a SDSU kickoff 100 yards for a TD. San Diego State was once again able to get a win in OT, but they have some problems they need to address before the bowl season.

Georgia Southern 26 Florida 20; Wondering what conference Georgia Southern is from? Maybe the MAC or Sun Belt or C-USA? Nope. Georgia Southern is an FCS school. An FCS school that came into the swamp and beat an SEC team to give the Gators their first losing season in more than 20 years. There might be an asterisk though. The Gators were playing without 8 game 1 starters and were on their 3rd string, true freshman QB. Georgia Southern was able to hold on at the end when Florida was unable to convert on 4th and 3 from the GSU 17. GSU QB Kevin Ellison was 0/3 but rushed for 118 yards and 2TDs. William Banks had 94 rush yards and a TD as well. Florida QB Skyler Mornhinweg was 14/25 for 122 yards and 2TDs, both to Solomon Patton. This means no bowl for the Gators, and they also have to finish their season against 2Florida State.

Mississippi State 24 Arkansas 17 OT; This game was weird. I don’t know if it was the same watching it on TV, but being there, I just got a weird vibe. Neither team played extremely well, but neither team played awful either. There seemed to only be great plays or horrible plays though. The end of regulation is the best example of this. Arkansas got a big pass play and all they needed to do was kick a FG to win it, but Alex Collins fumbled the ball on the MSST 9 and the Bulldogs recovered it. They made it down to FG range and looked like they were going to win as time expired, but the kick went wide right. QB Damian Williams ran 25 yards for a TD on the first play of OT, and Arkansas couldn’t get a first down. The game ended on a Brandon Allen pick on 4th down. It kind of summed up the Razorback’s season. They have been close, but then let a couple big plays beat them. This was Mississippi State’s 5th win of the season, meaning if they can beat Ole Miss in the Egg Bowl next week, they will be bowl eligible. The Hogs have to go to Tiger Stadium next weekend. I’m sure no one will give them a chance, but the Hogs always give 110% when they play LSU. Watch out for the upset. 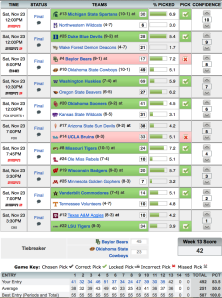 Stats and Scores from ESPN.com

**All teams now eligible for AP Poll. All 10 FBS conferences have committed to playing football this fall